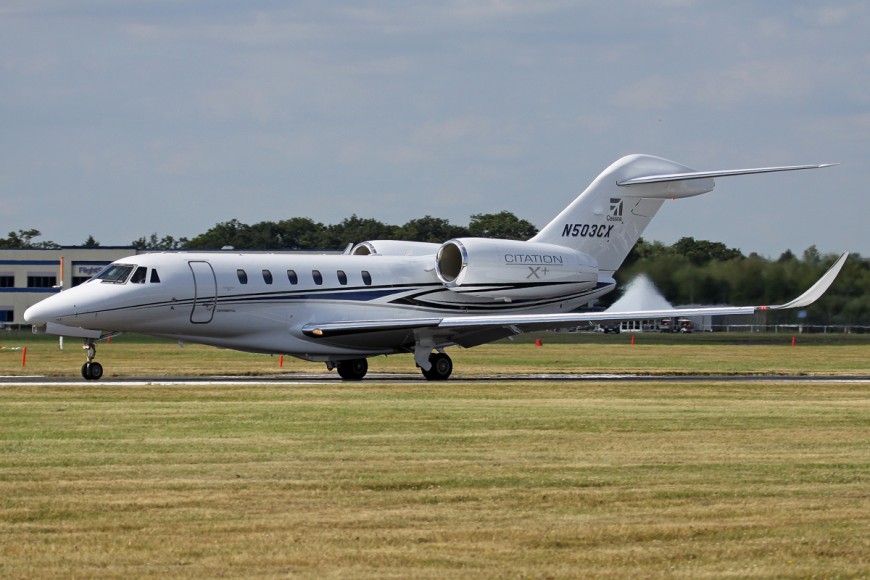 The Cessna Citation X+ is not only the fastest corporate jet, it is also the fastest civilian aircraft in the sky. It is marketed by its US manufacturer under the tagline – “Timing is everything – get there first!” It boasts “one of the most comfortable cabin environments for work and recreation.”

The Citation X+ is an enhanced version of the original Citation X. This aircraft was first announced in 1990 and it made its first flight in December 1993. FAA certification suffered extensive delays due to engine and avionics issues. Regulator approval was finally received in early June 1996. The original Citation X set a whole host of speed records and was renowned as the fastest commercial aircraft – second only to the supersonic Concorde – for most of its production. The key to the aircraft’s speed is the combination of powerful engines, a highly-swept wing and overall low drag. The original Citation X’s speed was only surpassed by Gulfstream’s flagship G650. The ‘world’s fastest’ moniker has now been regained with the development of the Citation X+.

The enhanced Citation X+ was first announced in 2010. It differs from its predecessor in offering upgraded engines – Rolls-Royce AE3007C2 with new fans, a stretched cabin, enhanced Garmin avionics, blended winglets and enhanced overall performance. It received FAA certification on 25 June 2014. The X+ offers a maximum speed of Mach 0.935 – 1,155kmh (767mph). It can also climb to a cruising altitude of 15,545m (51,000ft).

The aircraft made its first transatlantic crossing just two days before the start of the Farnborough Air Show 2014. It flew from Presque Ile (Maine) to Paris Le Bourget in 5hrs 33mins.

The way of the future?

In 2014 US manufacturer Aerion announced its intention to produce the AS2 – a supersonic corporate jet. It took a step further when it opened the order book for the new design at EBACE in May that year. The aircraft, which will offer a seating capacity of 12 is designed with a top speed of Mach 1.5 – 1,838kmh (1,142mph) and a long-range cruising speed of Mach 1.4 – 1,715kmh (1,066mph). This will shave three hours off a journey between Washington DC and Paris.

Aerion has entered into partnership with Europe’s Airbus Group to support flight specifications, components and assistance with design of the new aircraft. The manufacturer took a further major step when US fractional specialist Flexjet placed a firm order for 20 AS2 aircraft at the NBAA event in November 2015. Aerion is expected to announce the location for its production facility (either the US east or west coast) to coincide with the formal launch of the project in early 2016.

Flight testing of the AS2 is expected to begin in 2019, with first deliveries scheduled for 2022. Flexjet’s first example is slated for delivery in 2023.